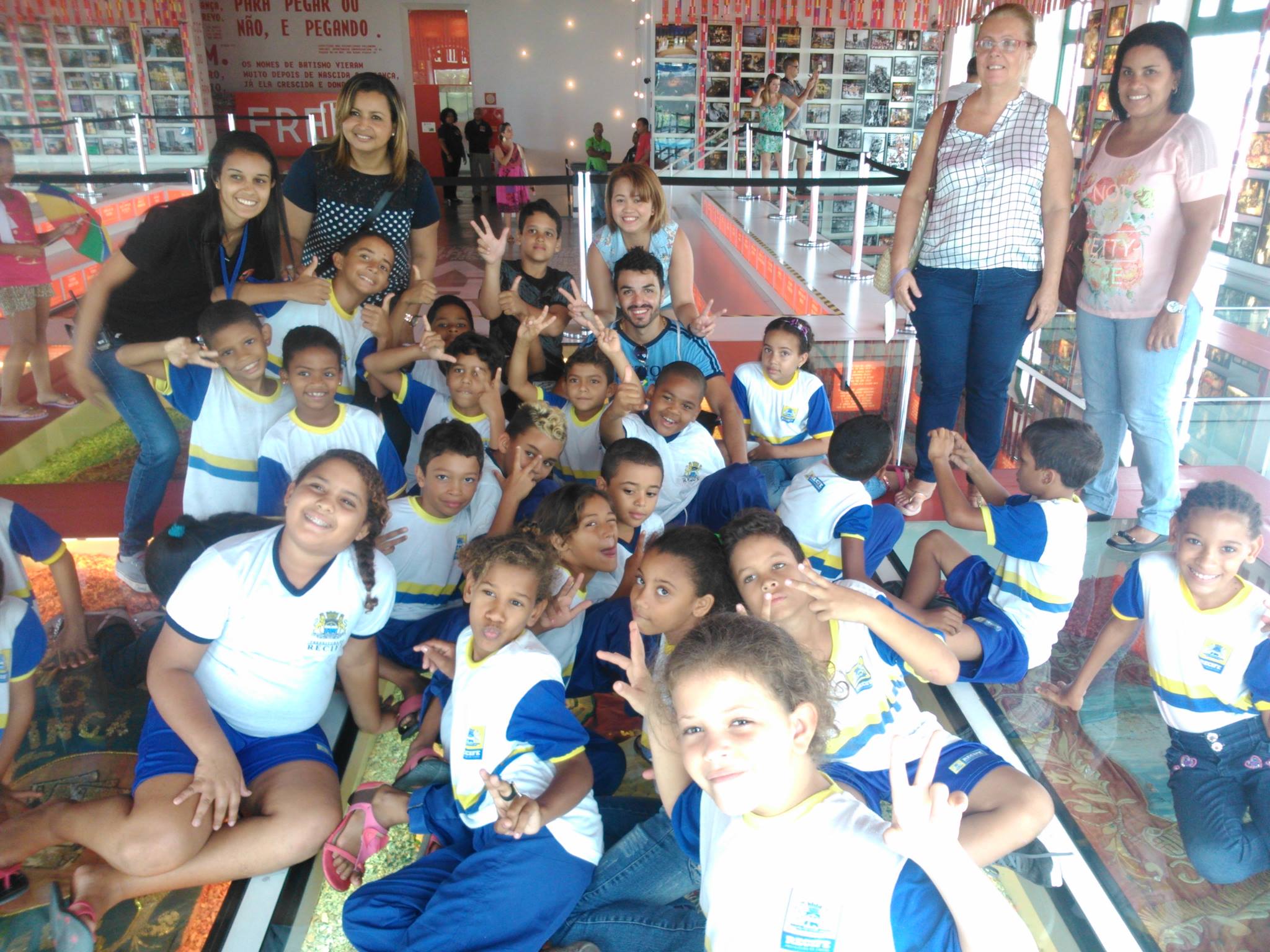 The happiest people in the world – BRAZILIANS

Every culture, every country, every town has its own uniqueness. The Norwegians left me with an impression of an incredibly calm and modest people, Singapore and Malaysia won me over with their strong vision and hard work. In India I saw that even in the most hidden and poor places smiles are hidden… Polynesians LITERALLY FASCINATED me with their STRONG ENERGY!!!

But of the 50 countries I visited, none affected me so strongly and none changed me as much as a person – like BRAZIL and its people…

When someone will ask you something about Macedonia? Or a Spaniard for Spain… no matter what country it is, people have both positive and negative impressions of their own country (especially we, the Balkans, know how to be critical and point out our flaws as nations, states). While in BRAZIL everyone is so positive, so happy that they were born in this amazing country… and my research started with the question – WHAT IS BRAZIL for THE BRAZILIANS ???

I learned a lot in Brazil and one of the things I learned is that some of them are familiar with the story of our Macedonia, more about what they learn in Brazilian schools for Macedonia click HERE.

But let me return to their happiness that I felt in their shining eyes and smiling faces as they spoke of their homeland. As an Intercultural Communication Master, I took my research in Brazil seriously and singled out 6 MAIN ELEMENTS that make Brazilians THE HAPPIEST PEOPLE ON PLANET EARTH.

LIFE IS ALWAYS FUN FOR BRAZILIANS

Just as in our country it is easy for someone to start talking about politics and everyone starts shouting, so it is very easy for Brazilians to pep up and dance. Only single smile or a few beers are enough to get everybody to start dancing, and the whole world knows that the most cheery and joyful Brazilians are present during the carnivals, and I was LUCKY to also enjoy the carnivals in RIO and SALVADOR BAHIA. For all the information about carnivals in Brazil MEANING/ADVANTAGES/DANGERS I will soon have a separate article you can find HERE.

Carnivals are a period of several weeks and even months when Brazilians forget all the problems of life and dance. Dance is an integral part of the fun and the life of Brazilians and I know that most of you are familiar mainly with BRAZILIAN SAMBA, but in the past 10 years and especially the last 2-3 years there is a new BRAZILIAN MUSIC AND DANCE GENRE called FUNKY.

To illustrate this new style of FUNKY parties, mainly typical of the FAVELAS of Rio – I’ll take you briefly to where you normally would not be allowed go, to the craziest private parties on the ship – for the staff only.

Music, fun, dance are in the blood of every Brazilian, everyone is so cheery and they are always smiling no matter the circumstances… and to prove to you HOW IMPORTANT THE ENTERTAINMENT IS FOR THE BRAZILIANS IN EVERY OCCASION with the following short video I will take you to one of the most dangerous places in the world, in the biggest Favela – ROCINHA…

We can definitely say that THE FIRST MAIN FACTOR for THE HAPPINESS OF BRAZILIANS IS ENTERTAINMENT, which is an integral part of Brazilian society and a way of functioning… it is dancing, smiles, music and regardless of the circumstances – many, many HAPPY PEOPLE…

ENTERTAINMENT is an important part of the life of Brazilians, but there is one thing that is even more important than music and dance, it is the WORLD FAMOUS BRAZILIAN SEX APPEAL!!!

Brazil is like another planet, and most of the world’s supermodels here would be considered anorexic, because Brazil is a country of curves, special attention is paid to the buttocks and the thinking is completely different from ours in Europe. In Brazil, the bigger the buttocks, the more attractive a woman is considered. And when girls work out they have a special day just for the buttocks, called BUNDA DIA.

…Girls are obsessed with having a beautiful body, but what I think is very important is that Brazilian women work out primarily for themselves and for greater self-confidence…

The body obsession of the girls I interviewed while talking about working out showed me that especially for Brazilian women, body and appearance are extremely important. Given that Brazilians have invented the thong, it is not at all surprising that they are obsessed with big buttocks… But what was a little surprising to me is that despite good genetics and a lot of hard work, hardly any girl is completely natural. Statistics show that in Brazil every third woman had plastic surgery for beautification… or in 2017 alone in Brazil were performed over 2 million and 400 thousand plastic surgeries, most of which are covered by the state.

In order to get more accurate information about how the entire plastic surgery system works and its major role in Brazilian society, I spoke with Dr. Specialist Kaiser Beto from Sao Paulo…

It was inconceivable to me that the state pays them for many of the plastic surgeries… But the interesting concept is that if you prove that with a more beautiful body you would be happier and more mentally stable, then the state helps you in the process towards your HAPPINESS… and thus, in a way, the state helps the perception of Brazilian women as one of the most desired women in the world…

RECORDERS IN NUMBER OF INTIMATE RELATIONSHIPS

The bigger buttocks, the more attractive body lead to greater self-confidence, and self-confidence leads to proactivity and, according to the research, to increased SEX appeal and more frequent intimate relationships. Brazil is ranked second in the WORLD with an average of 164 intimate relationships per year, which would mean an average of 3 times a week.

I have always had the thought that a nation, a state, a culture can be largely reflected through the “words”, “phrases”, “sayings” that are most often used. For us, Macedonians, we know our strange sayings “sleeps like a baby”, “say nothing, there’s worse”, or the legendary saying that I could never understand – “too much of a good thing is not good thing”???

To express myself more poetically – SAYINGS MAKE THE PEOPLE.

Unlike us, the Balkans, Brazilians have very calm and positive expressions, but let’s start with a video about the language spoken in Brazil…

I would call their language – BRAZILIAN-Portuguese, to illustrate how unique and positive it is I will start with the way of greeting in Brazil. Your day must be better because every morning starts with: “BELLEZA” which means BEAUTY, the answer to which often is “TRANQUILО” – which means calm/peace.

As with any of my research, I talked to the locals…

They mostly use positive and relaxing words and such are their sayings as well, there is one that best reflects the Brazilian relaxed spirit, but also their economy… “Leave that till the day after which you can do tomorrow” and I was sure that this saying is true when I wanted to order a cocktail in Salvador, Bahia

Let’s put the non/sedulity a side. However, imagine starting your day with walking around the neighbourhood and saying BEAUTY with your neighbours… or driving in the Skopje TRAFFIC saying the other car drivers “TRANQUILО” = calm, calm…

Brazil has always been open to IMMIGRANTS and after every world or regional war, Brazil has opened its doors wide to all refugees and thus today is one of the most mixed and diverse cultures in the world and in a way is an example of what would happen if the whole world mixes up and of course if we all live in a hot climate?

In Brazil it does not matter if you are black or white, whether you are Japanese or Chinese, political parties does not matter, it does not matter how much money somebody has, in Brazil there is a place for everyone… and a place on our list of main factors influencing the Brazilian happiness also have the NON-DISCRIMINATION AND ACCEPTANCE OF DIFFERENCES…

In the words of many of my Brazilian friends, in Brazil, as in any country, there is discrimination, but still they pointed out that unlike other places, in Brazil it is much easier for everyone to be their own and there is great openness for everyone to be accepted regardless of their religion, race, gender, sexuality or other characteristics…

In Brazil, everybody is welcome, and from now on Macedonians as well…

ALL OF BRAZIL IS ART

Some countries have museums, theatres, exhibitions or houses of culture, while BRAZIL – the whole country is one open theatre, one open show of talent and ART…

What left a strong impression on me is that in Brazil – everyone is a creator, there is an art story at every turn. Singers, painters, craftsmen, “sand architects”… if you want to know better THE ARTISTIC SIDE OF BRAZIL, LOOK AT MY ARTICLE ABOUT ART HERE.

Worldwide research shows that creative people and artists have 75% less stress, and 23% have happier lives…

There is a wise statement from Pablo Picasso: 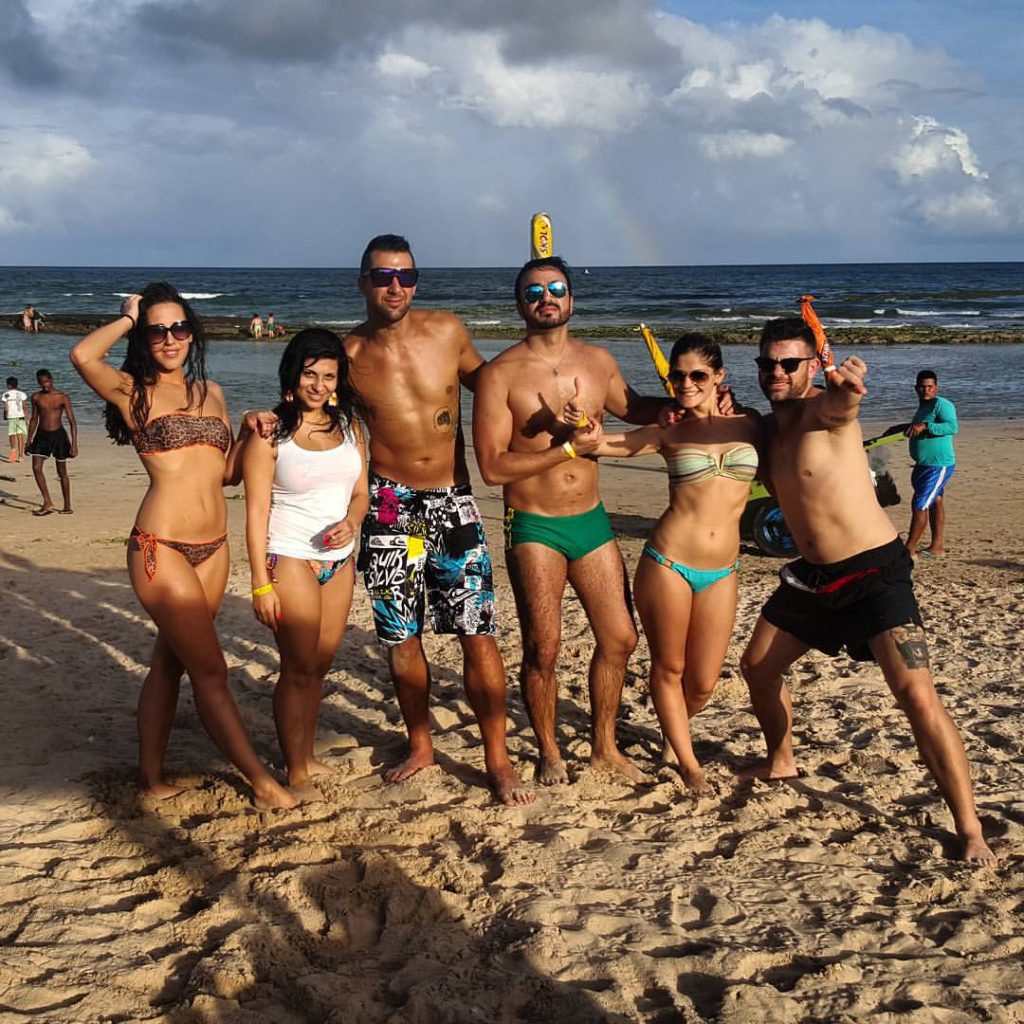 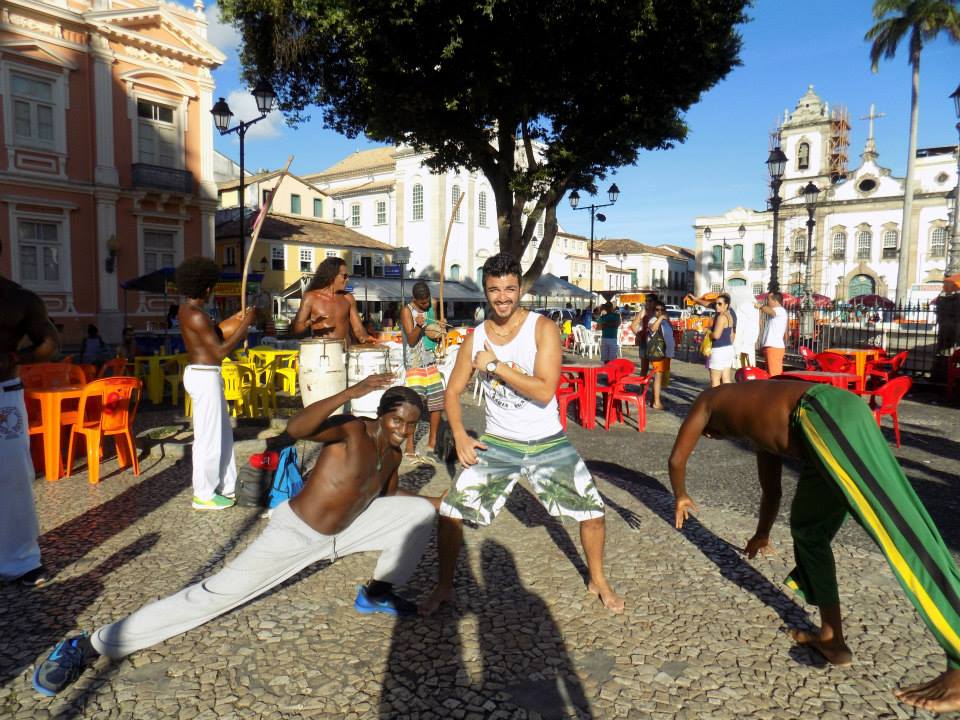 The things that influence Brazilians to be the Happiest People in the World, the Permanent Fun, the Incredible SEX appeal, the Positive Sayings and Positive Energy, the Non-Discrimination and Developed Art are slowly getting clearer, and I am getting closer to the answer I was looking for – WHAT IS THE SECRET OF THE BRAZILIAN HAPPINESS?

I met thousands of Brazilians, I interviewed hundreds, I immersed myself completely in the experience of BRAZILIAN MAGIC and to my great surprise I found the Secret to Brazilian HAPPINESS while learning CAPOEIRA , and this is how the story began…

Capoeira is an Afro-Brazilian martial art that combines acrobatics, dance, music and appeared in the 16th century along with slavery in Brazil and was a way for slaves to practice wrestling and their masters to think that they were dancing.

For more about the capoeira and the ability of Brazilians to deal with the negative things in life and the SECRET of the Incredible Happiness of Brazilians, I had the honour to meet and interview one of the world’s most famous Capoeira Teachers – PELEZINO…

REVEALING THE SECRET WITH THE TEACHER PELEZINO

For my teacher Pelezino, the capoeira is his life, he has been actively involved in this wonderful skill for over 35 years and has been living in Luxembourg for 10 years and teaching Capoeira all over the world.

Capoeira class is a music class, a history class, learning for a whole philosophy of thinking.

What makes Brazilians SPECIAL and HAPPIEST is the fact that life can throw – SADNESS, SLAVERY, VIOLENCE, POVERTY, HUNGER, DEATH, CORRUPT POLITICIANS in their face, and Brazilians are able to TRANSFORM IT INTO JOY, FREEDOM, CAPOEIRA, ART, SONGS AND THAT MAKES THEM THE HAPPIEST PEOPLE IN THE WORLD – just to find a way to transform corrupt politicians and THEY WILL OFFICIALLY BECOME THE BEST COUNTRY FOR LIVING…

It is up to us to LEARN from Brazilians and every day to TRANSFER EVERYTHING that happens to us into BEAUTY, JOY, POSITIVE ENERGY AND HAPPINESS…