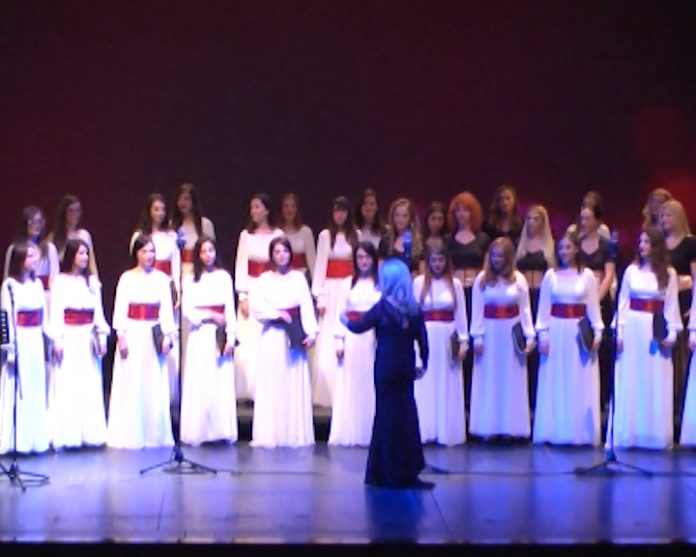 The Women’s Chamber Choir “St. Zlata Meglenska” exists as a part of the Macedonian Orthodox Church and it is the first of its kind of choirs in the Republic of Northern Macedonia. Letka Dimovska Polizova is the founder, artistic director and the conductor of the Choir. The Choir is composed by 22 women’s voices that belong to young academics and students from all public universities in Skopje. Although they are volunteers, these young people contribute to the reputation of the Macedonian Orthodox Church, Macedonian cultural tradition and popularity of the choral singing in authentic way and high quality. Supported by the Ministry of Culture, the Ministry of Foreign affairs, as well as several embassies of the Republic of Macedonia abroad, the choir accomplished excellent international presentation and affirmation of Macedonian traditional music the: United Kingdom, France, Italy, Greece, Slovenia, Serbia, Slovakia, Croatia, Poland, Portugal, Belgium, Bulgaria, Switzerland, Sweden, France, Czechoslovakia, Germany, Spain, Latvia, California, America, Australia, Austria, Canada, Russia Ireland and other countries.

Conductor biography: Letka Dimovska Polizova- academic musician, is the founder and a conductor of the Choir. She acquired high reputation through her activity as a founder, a conductor and a successful leader of several choirs in Macedonia. She is a winner of numerous important national and international prizes. As a leader of the “Sv.Zlata Meglenska”, she achieves the epithet of the most successful female conductor in Northern Macedonia.