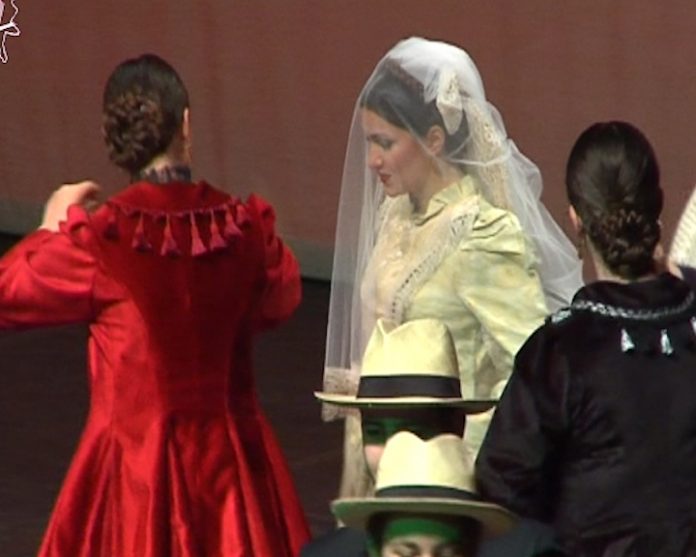 Originality, centuries-old tradition, spirituality, the genetic code for recognition among world cultures. That is the Macedonian folklore treasury, which we bravely defend and preserve throughout the centuries until today. The immensity of this culture is as great as the immenseness of this people, as a moment of confrontation with the whole world and ourselves so that we do not forget our roots.It is through the rich folklore creative opus that we identify ourselves everywhere. That’s why we celebrate, nurture and record it, to pass it on to all followers of this musical style.The opulence of the Macedonian folk refrains is ample and through the dance, it becomes even stronger and reflects itself through the “Teshkoto”, “Kopachka” to be inscribed in the world protected intangible cultural heritage and UNESCO as the greatest light for Macedonian folklore and our identity. Therefore, it is also presented in part of the repertoire of the Festival of Folk Culture “Preobrazhenje” Vevchani, performed by the KUD “DRIMKOL” Vevchani, along with the rest of the folklore selection of original dances and songs from the country and abroad, with the entire colourfulness of tradition, but with a single task, to preserve it from oblivion and to pass it on to the younger generations. And they, with all the mastery they have learned from the older dancers and singers, confirm that their folklore has gotten “under their skin” and has not left them alone. Therefore, they study it and they dance. This Vevchani festival gives enough folklore enjoyment expressing it through the successful performances of Stevche Stojkovski with his bagpipe to the loud sound of the zurla and the heavy beat of the drum.That’s folklore. Likewise, it is an inspiration for the students from the Music and Ballet School Centre “Ilija Nikolovski Luj”, who have so absorbed all the knowledge that their mentors passed on to them, that they can masterfully transfer it to the stage, with all thecolourfulness of the traditional costumes at their concerts.Is it possible to talk about our folklore and what leaves a mark from recent times, without mentioning the name of the music ethno group “Sintezis”, which with the arrangement expertise of eminent music professionals, managed to create a new sound, something that not only it revived folklore as a whole, but also managed to makeyoung people listen and sing and empathize with it. Certainly, thanks to the rustic nasal singing, as a synthesis of the past, present and future of the Macedonian vocal sound. All this, as a special musical cake with the concert on the occasion of the 10th anniversary of their work.Folklore is an inexhaustible inspiration, as is the case with the Ensemble “Macedonia”, a representative of the Macedonian traditional culture, showing it through the annual concert entitled “Na asker kje otidam”, where young artists worthily represent what is called the past, and what is thought to be a spiritual and material culture.