Documented and recorded without any preparations 🙂 This is just a beginning, there will be lots of challenges.

To put it with my mother’s words “Woe betide us, son, you didn’t stop talking about us on TV, and the Internet”:)

We are already on the air, and it’s a big deal that our neighbor called us to as “How made our kitchen”:)

Watch what happens behind camera and backstage?

How videos are made..? Yes, yes, there will be new videos…

What happens before the stand-up performances, before the premiers of the plays? What happens to a Macedonian traveling abroad? See the views and stories my friends will share on the topics I cover… And I better stop writing… I mean, it’s a long text man… If you read this to the end, it means you are really concentrated. Well done!

There will be plenty more – WATCH US 🙂

Traditionally, history represents a discovery, analysis, hypothesis, and theory based on written documents from the past, which came to us from the potential capacities of the well-established libraries…BUT! ..Is it possible to imagine the past, without taking into account the history of geography, the history of climate, of geology, of meteorology…

Official history still persists with the theory that civilization is impossible without bloodshed or war (Colin Renfrew).

Macedonian archaeological artefacts, however obedient to the interpretation and attempting to claim this hypothesis, when reasonably analysed, still result in a logical conclusion that civilization, contrary to this hypothesis, begins without autocracy and conflict.

The Neolithic is not a matriarchate (as a precursor to the patriarchate of the metal age), but a matrilineal society in which motherhood is MODUS VIVENDI … Let’s read the Great Mother’s message from Tumba Madzari…

According to the ancient Macedonian myth (TODAY AS PART OF THE SO CALLED GREEK MYTHOLOGY) about Dayok and the Medes, the extremely critical moments of the people’s deluge of salvation are in the wise organization of fear that is being transformed into useful discharge. It is impossible to explain the set of circles that tattooed Macedonia without understanding the wisdom of the Great Neolithic Mother who precisely because of such ingenuity will be promoted by the time and the actions of generations as a chthonic deity who conceived the idea of MONOTHEISM. Vujevci neighbourhood is a good artefact for this civilization feat…

Macedonia is one of the richest archaeological sites on the Balkan Peninsula and without its artefacts it would not be possible to complete the history of Europe and the world. Its cultural layers are rich in remnants of a material culture dating from around 7000 – 6000 years BC to this day.

According to the analyses made in the last ten years, interest in Macedonia’s past in the world, and in our country in particular, is constantly growing. Turning public attention to the archaeological researches has also led to more serious investments in this area. As a result, Macedonia has in recent years been a country of increasing interest to the expert world public.

Therefore, it is rightly expected that this documentary film series will strengthen Macedonia’s portended position as “the centre and pre-source of European culture”, in the words of French archaeologist Dr Catherine Colange.

The primary goal of this project is to present the civilization contribution of Macedonia from the Neolithic Period up to the 19th century to the general public.

It is also particularly important to promote the Macedonian cultural heritage and treasure, to reveal the secrets of the folks who have inhabited these areas and to make a small contribution to promoting the Macedonia brand.

In addition to educating ourselves about our own history, another one of the goals of the documentary film series CV Macedonia is to make us aware and proud of our origins and its key role in the history of European civilization.

The expected results are in line with the pre-set goals of this documentary film series.

They are aimed at acquainting the viewers with insufficiently cleared events and periods of Macedonian history, acquainting the remnants of the cultural heritage on our soil, strengthening the sense of national belonging and pride among the Macedonian people, as well as raising awareness of our significant place in the history of European and world civilization.

We also hope that this documentary film series will spark a wider discussion and polemics among the expert public in the country and around the world, which should result in an initiative to review, verify and further research the exposed data, which will result in the creation of a new, revised and supplemented History of the Macedonian People.

International knowledge competition was held in the private secondary education school Yahya Kemal Skopje this year. OWLYPIA-The Intellectuals’ Challenge 2019, local round, is a challenge for young people in the country.

This is an exciting international competition for students aged 11-14 and 15-18. The goal of this competition is to inspire the intellectual curiosity of every young mind and every year has a different topic. In Owlypia, the students participate in three competitions: Owlypia-Internet, Owlypia-Locals, Owlypia-Global (Cambridge in England and Harvard in the USA).

This exciting international competition, which was held on 23-24 November this year, has a series of team challenges in five different topic areas. Young intellectuals had an opportunity to share their creative ideas, to develop their multi-disciplinary academic skills, to discover their potential, to build their confidence, to develop teamwork skills and make new friendships.

During the event’s team challenges, there were groups of three students each that faced five different challenges from the five given subjects during 2 days. Team challenges were: test on a selected topic, writing an essay, debating, improvised speech and team test.

Furthermore, Owlypia consists of 5 topics and they are social studies, art and design, literature and culture, science and technology and economy and business. The students selected one of the given subjects and prepared for the competition by using the resources made available for that subject.

After finishing the competition, the most successful students were awarded certificates and medals, confirming the biggest successes and traditions they nurture from previous years, and that is to win a record number of gold, silver and bronze medals, and certificates of appreciation by including a large number of students in this kind of global competition.

Such competitions are of great meaning for the development of student’s knowledge, nurturing of the cooperation and teamwork, and add to the value of operation and quality of the educational institutions as key to the development of you generations, stimulating the intellectual curiosity and improvement of their academic skills.

According to FON’s management, SWISS UMEF University will enable the students from North Macedonia to pay local Macedonian prices for their studies and to acquire quality education and Swiss diploma which will give me big opportunity to find employment after finishing the studies. The students have the opportunity to study at first, second and third cycle of studies with Macedonian tuition under same conditions both here and in Geneva, and will obtain a double degree.

A humanitarian event and workshop under the motto “We are all the same, we are all European” was held in the premises of the European University. Many children with disabilities participated and they were accompanied by a few celebrities from our music scene and humane people. During the workshop, two scholarships for studying at the European University were awarded. The event aimed to encourage all socially responsible companies that we should give a hand to people from all vulnerable categories and to help them enter the world of knowledge, by including the people with disabilities, handicapped people, people with rare diseases as well as the children without parents in the educational process. For this event, the European University, as one of the oldest private educational institutions, with 18 years of successful history, formed a team of enthusiasts and humane people employed at the European University, led by the director of the prof. Bojo Andreski M.D. Dental Clinical Centre, prof. Aleksandra Andreska Sarevska M.D., who designed hand-made dolls especially for this workshop, that today were dressed by the children together with all attendees of the event.   The general manager, prof. Biljana Andreska Bogdanovska M.D. gave warm welcome to the children, their parents and all attendees.

The event was also supported by the major of the Municipality of Centar, Mr Saha Bogdanovikj, who also presented the scholarship to Veronika Ljorovska – a person with a disability – who is the future student of the Faculty of Art and Design. Rebeka Jankovska Risteski from the Give Us Wings Association, as well as Marjan Kocev, Marijan Stojanovski, Ognen Zdravkovski and the bank Tajfata gave their contribution and support. The charismatic and talented Valentin and Spa were hosts of the event.

This is a TV project which offers a new, alternative approach in the production of an informative program in the Macedonian air. Every informative show has different duration depending on the type of event which is being realized and may last from 10 to 90 minutes. It is about positive events and personalities from our city and country. A special accent is put on the topics related to the success of individuals, institutions and companies in areas such as sports, science, business, art and culture.  As part of this project, very often we broadcast live and also footage of science conferences and events related to educational institutions (faculties, universities, elementary and secondary education schools). The positive approach of the topics which are being tackled as well as the research and scientific segment are a challenge for NASHA TV to support this type of events.

KAZHI I NAPRAVI NESHTO DOBRO ZA MAKEDONIJA is one of NASHA TV’S first projects which lasts for more than 11 years. 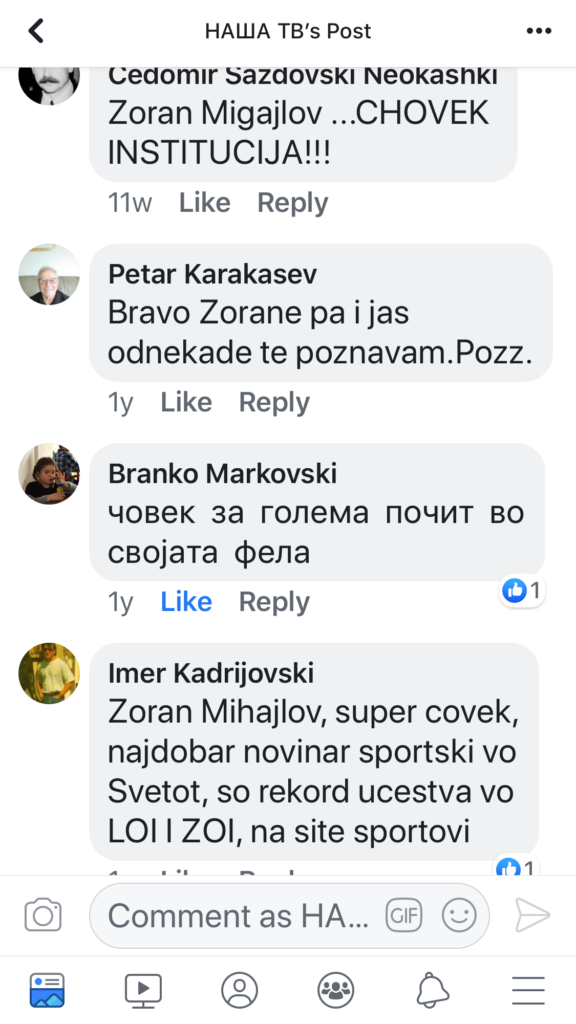 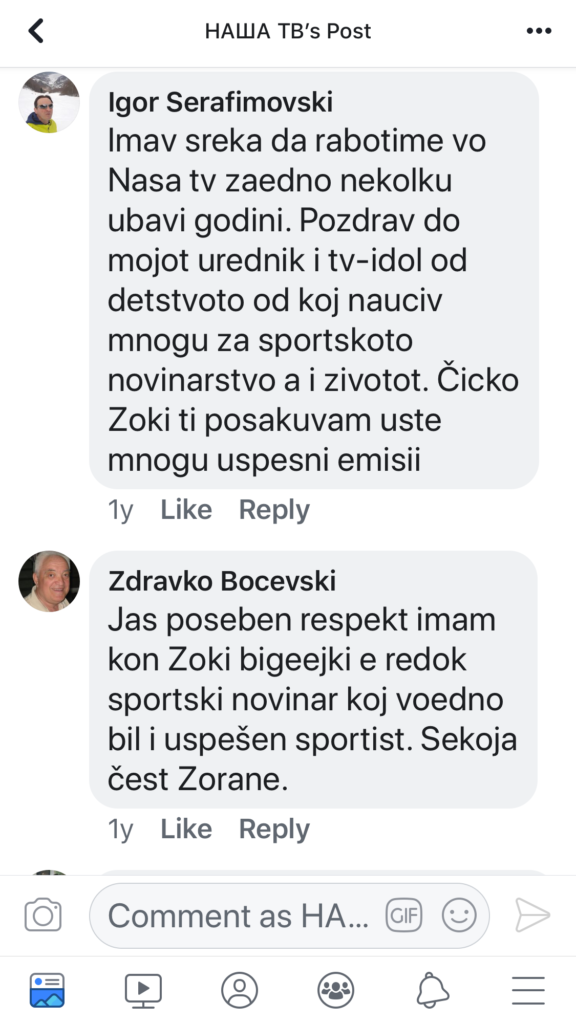 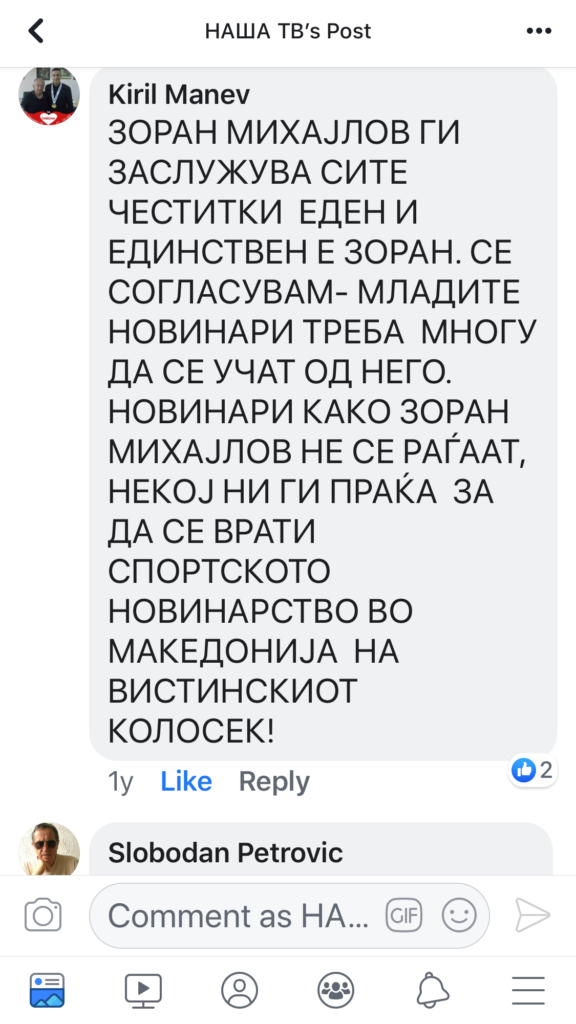